Is there anything out there? 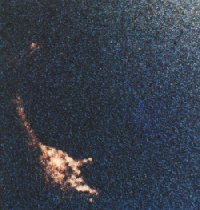 The 1970's were a very busy time on Loch Ness for 'Nessie Hunters'. One of these hunters was Dr Robert Rines, who in 1970 used sonar on Loch Ness which provided more proof that large objects inhabit the Loch. Dr Rines, President of the Academy of Applied Science, Boston, Massechusetts, led a team which was to put their sonar equipment to such good use, that on the 20th of September that year it detected objects intruding into its beam at the same time as fish were seen to be disturbed. During the summer of 1972 Dr. Rines returned to the Loch bringing with them an Edgerton underwater stroboscopic camera and more sonar equipment.

Experts estimated the flipper to be from 6 to 8 ft in length. American Smithsonian Institution, one of several top bodies approached for comment stated that the tail structure resembled the shape of the tail of newts. The New England Aquarium stated that the flipper-like structure certainly did not appear to resemble the structure of any known mammilian creature. The British Natural History Museum, while acknowledging that the photograph were genuine found that 'the sequence appears to show the passage of a large object'. The sonar chart which recorded the passage of the objects was subsequently analysed by several independent experts, whose composite verdict found that there are large animals in Loch Ness which are at least 20 to 30ft long with 'several segments, body sections or projections such as humps'.

For the next few years their team had very little success which had a lot to do with malfunctions in the underwater camera rigs. In 1975 the biggest breakthrough for Dr. Rines and his team came when a set of close-up underwater photographs were taken which when released in December of that year caused a worldwide sensation. The pictures which show the head and body of one of the creatures in remarkable detail, were taken with the Edgerton strobe camera during the expedition the previous June.

For several months the pictures were examined in secret in zoological centres in Britain, America, Canada and Europe. It was planned to release them in early December at a scientific symposium in Edinburgh to be attended by zoologists from all over the world under the chairmanship of the famous British naturalist and painter Sir Peter Scott. News of the pictures leaked out at the end of November, before the study of them was complete and caused such excitement that the sponsors of the symposium, who included the prestigious Royal Society, felt it would be impossible to conduct a proper scientific discussion in such an atmosphere. Consequently the symposium, at which the whole Loch Ness controversy would have been debated at length and hopefully resolved, had to be cancelled. In its place a meeting was held in the Grand Committee Room at the Houses of Parliament at the instigation of David James, the MP who had led the Investigation Bureau. Before a large audience of members of both houses of Government, scientists and journalists, the Academy team presented the results of their research, including the new underwater photographs, together with supporting statements from eminent zoologists who had been examining the material. Dr. George Zug, the Curator of Reptiles and Amphibians at the renowned Smithsonian Institution in Washington said in his personal statement : "I believe this data indicates the presence of large animals in Loch Ness, but is insufficient to indentify them".

💬 Messenger
✂
Start a new message on social media or start a new email then paste this link using the mouse or Control-V on your keyboard.
Sign in to follow page Back to the Top ⚓